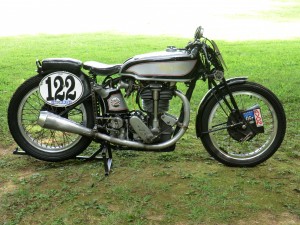 Built by Stu Rogers, the 1937 Norton is the Britten of its era. Difficult to ride, it will tell you if you are doing something wrong right away and start mishandling and try to spit you off. The center of gravity is very low and it has a sound like no other four stroke single around. When the brakes fade you might as well start dragging your feet, until the next corner, when that big air scoop has done its job. You will also know where all the bumps on the track are thanks to lack of rear suspension. It is a real pleasure passing other fully suspended modern race bike in the corners!! 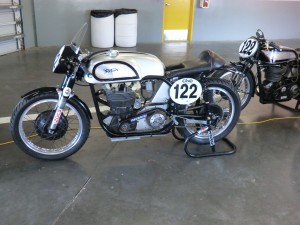 Found in a barn 6 years ago. Was missing its tank, seat, exhaust etc. Top end was off, and the bike was a real mess. But this is where Rob Mckeever, Bob’s son, really joins the racing effort. Thanks to him and Ken Mckintosh in New Zealand for chassis parts, and Maurice Candy in Delaware, this bike springs back to life. Incredibly it has matching engine and frame  numbers, which is extremely rare. A two year long restauraion, and the bike is ready for racing, no Norton is going to sit in fro