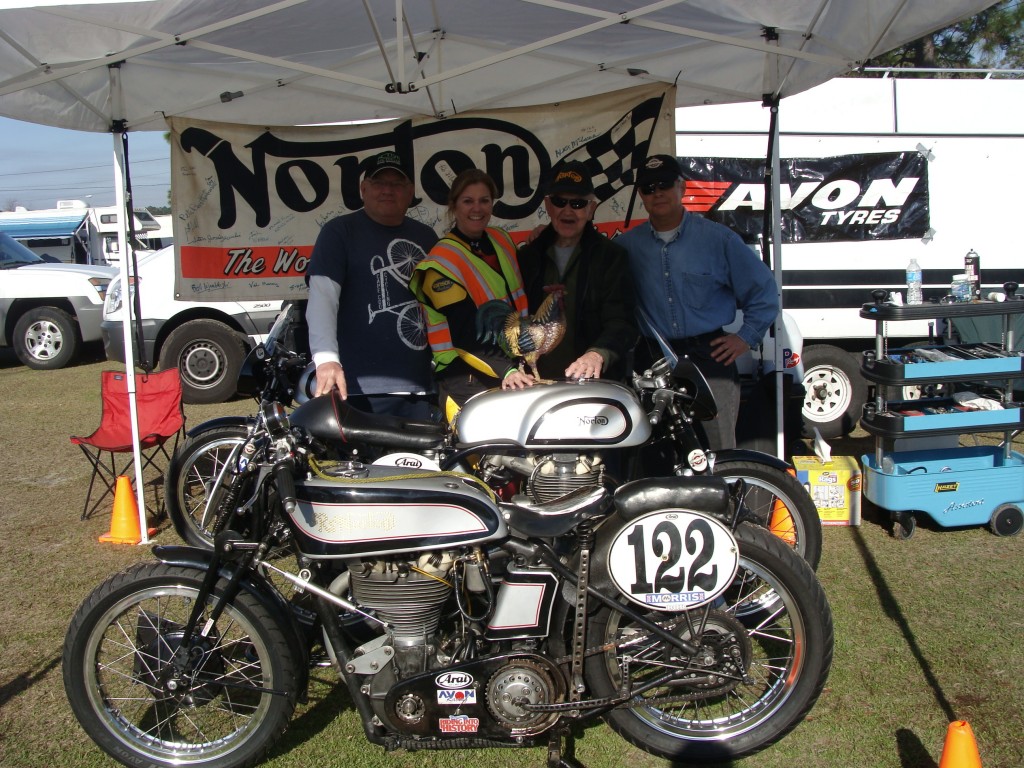 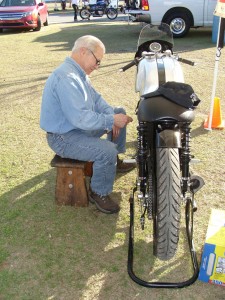 First race of the year, and we were back to Roebling after not racing there last year. Friday practice was very cold with frost covering the bikes early in the morning. The team this time was almost complete, Bob McKeever stayed home with the start of a cold. Nobby Clark, Joe Clements, Cindy Hill and Rob McKeever were all there trying to stay warm. 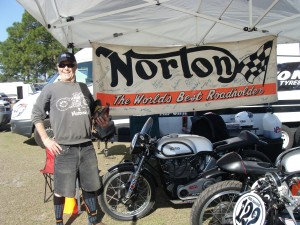 Cindy ran off to her race school while we prepped the Nortons with air, gas and oil. The weather eventually warmed up and we got a few laps in on all the bikes which were running well in this cold air that they love.

Saturday up early again, warmer day, we were ready to race.  Pre 40 was a lonely race out front, but Class C foot was tight with Jake Hall  giving me a rough time on his BSA, but the old boy took care of business and went steadily around the track for win no.2.   Classic 60’s was a walk in the park for win no. 3.   Last race of the day 500gp and this time it was Rob Hall and his BSA Goldstar who took off in front and kept a determined gap, and then the 62 replica Manx engine decided to go on strike and I got a ride back to the paddock in the crash truck.   Ended up being the cam box had decided to disconnect itself from the rest of the engine… Cindy did her first race and finished with flying honors and shockingly good lap times for the first time out!!!!! 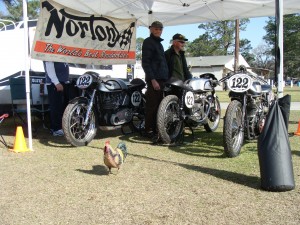 Sunday was even warmer and hard racing with Art Farley in pre 40, winning by half a transponder. Class C foot and this time it is Rob Hall on the BSA, but he missed a shift at the atart and I was really pumped doing a 1.31 and good in traffic, so that was a big win. Classic 60’s Jake Hall was now riding the BSA, but had clutch/belt problems and could not really fight. I was riding the 61 Manx so being very careful with this authentic machine I enjoy all the help I could get. 500 GP comes around and we are only 4 on the grid….. so I enjoyed following Dave Roper and Paul Germain and watched them battle and pulled in after the half way point. Ropers bike was all over the place, while Germain was very steady, but Dave prevailed by a bike length. Cindy Hill again had all the paddock eyes on her, and beat her Saturday lap time by 5 seconds, so we better watch out next time…..

Big thanks to everyone who helped out with the first race meet of the year, 7 wins out of 8. Vanson helped Cindy with a suit, Laurie and Robert kept Joe Clements on track and made sure we had lunch. Thanks to Dainese for my new boots, and Avon for the grippy am26 tires, which were working perfectly at  this track. Riding the 1937 Old Boy Norton was a real pleasure at this track and only a few seconds down on the modern Featherbed 62 spec Manx was very encouraging. Beating some 30 year old kids too. They have started to call me “Old Man”… not sure what to think. NOLA in Louisiana is next, thanks to all.